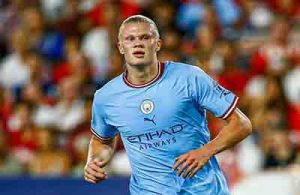 Erling Haaland scored a decisive goal, yesterday, Wednesday, during Manchester City’s victory over his former team, Borussia Dortmund (2-1), in the second round of the Champions League.

This goal is Halland’s third in the Champions League in the colors of Manchester City from two games, to share the top scorer in the competition with Robert Lewandowski and Kylian Mbappe.

Haaland also scored 10 goals in the Premier League, and is his top scorer so far.

Although the English team did not stand unable to score, in previous versions of the Champions League, the presence of Haaland’s player would have enhanced the club’s chances of reaching the final, and even crowning the continental title that Manchester City lacks.

Last season, City did not include strikers who played at the head of the spear, with the exception of the Brazilian Gabriel Jesus, who did not shine strongly, and moved to Arsenal during the Mercato last summer.

Guardiola relied on the wings and midfield players to score goals.

It is expected that City’s yield of goals will increase this season, as he scored 4 goals or more, in 4 out of 9 matches, which will have a prominent role in any potential achievement for the club.

But attack alone cannot achieve titles, and Manchester City is still suffering defensively in some matches, as 10 goals have been scored so far, a problem that accompanied Guardiola with the team since he took over it.

Guardiola knows that what took him out of the Champions League, last season, was the performance of the defense, which accepted 6 goals from Real Madrid in two matches.