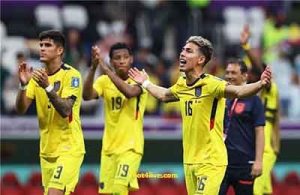 The Ecuadorean national team defeated its Qatari host, 2-0, this evening, Sunday, at Al-Bayt Stadium, in the opening match of the Qatar 2022 World Cup.

The Ecuadorian national team owes credit for this victory to Ener Valencia, the striker of Fenerbahce, who scored the goals of the match in the 16th and 31st minutes from a penalty kick, after the referee canceled a goal in the third minute for offside.

The Ecuadorian national team dominated the course of the game throughout the two halves of the match, at a time when Qatar’s Al-Annabi did not appear at its usual level, which qualified it to win the 2019 Asian Cup title and third place during the 2021 edition of the Arab Cup.

The match was mediocre, and the Ecuadorian team dominated most of its periods, especially in the first half, while the Qatari team appeared disappointing to the hopes of its fans, who expected a better performance and result.

The beginning of the first half was in the interest of the Ecuadorian national team, who did not find any significant difficulty in controlling the course of things, which they owned very early without any resistance from the owners of the land.

The Qatari team appeared very modestly and did not provide anything during the first minutes, which witnessed an early goal for Ecuador, which was canceled by the Italian referee on the grounds of offside after returning to video technology.

Although the canceled Ecuadorian goal was supposed to be a warning bell for the owners of the stadium, this did not happen, and Ecuadorian control continued over the course of things.

It was only natural that Ecuadorian control resulted in the first goal, and the guest team succeeded in reaching the Qatari goal through Ener Valencia in the 16th minute from a penalty kick.

The Qatari team remained in poor condition and did not appear as required, leaving the opportunity for its competitor to control the course of affairs and organize more attacks that posed a threat to Saad Al-Sheeb’s goal.

And with the continuation of Ecuadorian control, it was time for the second goal, which was scored in the 31st minute, through Ener Valencia, who received an elaborate cross from the right, which he met with his head, which settled in the right corner of the gray.

The Qatari team began attempts to return to the match, but timidly without any step, except for Al-Moez Ali’s header, when he received Pedro Miguel’s cross, but the ball went out by the post.

The beginning of the second half was calm, and Qatar’s attempts remained without any seriousness, and the modest state of the team that appeared in the first half continued, with the exception of a few attacks that did not reach the level of danger.

Calmness prevailed throughout Al-Bayt Stadium after the Ecuadorian national team settled for two goals, while the Qatari team seemed lost, unable to deal with the match or seriously reach its opponent’s goal.