England and Germany leave the Nations League with a dramatic draw 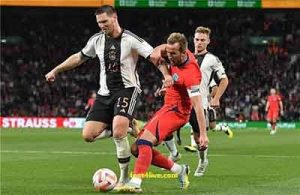 England and Germany exited the European Nations League with a thrilling draw 3-3 , today, Monday, at Wembley Stadium, in the last group matches round.

The England goals team came through Luke Shaw, Mason Mount and Harry Kane (penalty kick) in the minutes (71, 75 and 83).

While Germany scored a hat-trick against England, Kai Havertz “double” and Ilkay Gundogan (penalty kick) in the minutes (52, 67 and 87).

The German team finished third in Group C with 6 points, while England were bottom of the standings with 3 points, without achieving any victory.

The German team took control from the beginning, as it tried to reach Bob’s goal, and the first opportunity was from a shot fired by Gundogan, but it crossed the crossbar.

The danger on both goals did not appear for several minutes, amid a defensive reservation from the English, while the control of the Germans was negative most of the time.

Contrary to the current, Sterling almost snatched the goal of the advance, ending it by evading one of the defenders and hitting a creeping ground, which Ter Stegen saved brilliantly.

Sterling returned to threaten Ter Stegen’s goal again with a dangerous shot from the left, but the German goalkeeper had it on the lookout.

Kimmich fired a creeping ground shot towards Bob’s goal, but the ball passed near the post, so the first half ended in a goalless draw.

With the start of the second half, German coach Hans Flick pushed forward Timo Werner at the expense of Jonas Hoffmann.

But Werner missed the opportunity of a goal after receiving a pass from Kimmich, to surprise everyone by meeting her with a stray shot outside the field.

Maguire made a fatal gag after giving Musiala the ball, and the latter tried to pass Harry towards Bob’s goal, but he fell to the ground after colliding with him.

The German players demanded the referee of the match to award a penalty after a handicap to Mosila in the area, but he did not respond to them and ordered the resumption of play.

The referee had to resort to video technology to watch the shot himself, to find out that Maguire had obstructed Musila’s leg, to actually award a penalty scored by Gundogan.

Sulley surprised everyone by advancing towards the home side’s penalty area, to exchange the ball with one of his colleagues before firing a creeping ground shot that passed next to the post.

Harry Maguire refused to limit the matter to this point, to advance towards the German penalty area, to provide offensive support for his country.

But the defense of the visitors managed to extract the ball from Maguire and launched a counterattack, which Havertz ended with a superb shot into the net.

And the England team intensified its attacks to reduce the result, which he realized when Luke Shaw shot, and Sully knocked it out of the center of the goal after crossing the line.

The goal raised the morale of the English, so that substitute Mason Mount succeeded 3 minutes later in adding the equalizer with a powerful shot outside the penalty area.

Kane almost made his mark, but his ball passed next to the post, before the England players demanded a penalty kick for Bellingham due to a violent intervention on his foot.

The referee awarded a penalty kick in favor of England after using video technology, so that Kane succeeded in executing the kick successfully, scoring the goal for the home owners.

The response came quickly from the Mannschaft after Gnabry fired a long-range shot, which was saved by Bob, but rebounded from him in front of Haveritz, who put it in the net easily.

The match ignited in the last minutes, as Saka almost netted Ter Stegen with a fatal goal, had it not been for the ingenuity of the German goalkeeper, who turned his shot into a corner.