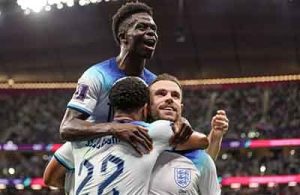 The long-awaited shock will indeed take place. Effective and lethal on its highlights, England clearly beat Senegal this Sunday in the round of 16 (3-0). This qualification, acquired thanks to goals from Jordan Henderson, Harry Kane and Bukayo Saka, allows the Three Lions to stand on the road to the France team, which they will face in the quarterfinals on Saturday evening (8 p.m.).

England join the French team in the quarter-finals. Gareth Southgate’s players, first jostled by Senegal, finally had a rather quiet round of 16, with a big win (3-0). The English showed realism to punish the Lions of Teranga, overwhelmed by goals from Jordan Henderson, Harry Kane and Bukayo Saka. The semi-finalists have therefore prepared their meeting perfectly, next Saturday (8 p.m.), against the reigning world champions.

A leisurely ride for England. Facing the reigning African champions, the Three Lions had a worry-free end to the match, they who led 3-0 after only 57 minutes of play. And yet, Aliou Cissé’s players may regret their lack of precision against the opposing goal, because they entered their game very well. If they left the ball to their opponents, it was they who created the first clear chance, in the 22nd minute.

Senegal pushed, then got punished

After a recovery from Boulaye Dia repelled by John Stones, Ismaïla Sarr presented himself against Pickford in the six meters but he missed the target. In the process, it was Sarr who served Dia on the left in the British area, but the shot from the former Rémois was perfectly repelled by the firm left hand of the Everton goalkeeper (31st). Then, on their first dangerous situation, Harry Maguire’s teammates saw Jude Bellingham serve Henderson on a set, before he deceived Edouard Mendy from the left (1-0, 39th).

A club blow on the neck of the Senegalese, who were thrown into the ropes just before the break, on a fatal counter from the English concluded coldly by Kane (2-0, 45th + 3). In addition to opening his counter in this World Cup, the Tottenham striker took the opportunity to give his people some air and also to make history, becoming England’s top scorer in major tournaments with 11 goals, ahead of Gary Lineker (10).

Returning from the locker room, Phil Foden got the better of the Senegalese defense before firing a perfect cross for Saka, whose finish was flawless (3-0, 57th). What definitively close all suspense in this meeting, the perfidious Albion retaining its control of the game against the compatriots of Sadio Mané. The Bayern player sees, from afar, his partners coming out the back door of this World Cup. England, she offers a summit that promises. We are already looking forward to it.