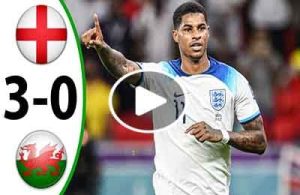 The England national team confirmed its qualification for the final price of the 2022 World Cup, which is currently being held in Qatar, by defeating the Welsh national team 3-0 on Tuesday evening, at the end of the second group competitions.

The England national team topped the second group with 7 goals, to set the “Three Lions” team a date with the Senegalese national team, second in the first group, in the final price, while Wales’ balance settled at one point at the bottom of the group.

England coach Gareth Southgate made a set of adjustments to his squad, where Phil Foden participated mainly in response to mass demands, and played in the front line alongside Marcus Rashford and Harry Kane.

Jordan Henderson started the match at the expense of Mason Mount, while left-back Kyle Walker returned to the squad after recovering from injury, to play instead of Kieran Trippier.

The England national team dominated the atmosphere of the first half, amid desperate and exaggerated defense by the Welsh national team, and the English waited until the tenth minute to threaten their opponent’s goal, when Kane passed a through ball, through which Rashford faced goalkeeper Ward, who blocked his attempt.

Foden tried his luck with a weak shot that passed by the near post in the 14th minute, and Rashford fired a powerful shot, which Wales back Neco Williams headed away, which necessitated his treatment in the 23rd minute.

In the 36th minute, Williams was unable to complete the match due to a slight concussion following the previous shot, so right-back Connor Roberts entered in his place.

A joint game between the England players resulted in Bellingham’s pass reaching Foden, who controlled the ball before shooting over the goal in the 38th minute.

And in stoppage time, the Welsh team launched its first shot in the match through Joe Allen, whose ball went high over the goal.

The captain of the Welsh national team, Gareth Bale, left the field at half-time due to an injury, to replace him with Brennan Johnson.

But the England national team finally managed to score the lead in the 50th minute, via a direct free kick, which Rashford executed accurately towards the far post of the Welsh goal.

One minute later, the English added the second goal, when Kane sent a cross from the right, followed by Foden, who was free from control, into the goal with a direct touch.

The Welsh team was active after the two goals, and Daniel James got the ball on the left side, before hitting it with his right, it passed near the far post in the 55th minute, and one minute later, Welsh striker Craig Moore hit a ball from outside the penalty area, which bounced off the head of defender Harry Maguire, before To be removed by goalkeeper Jordan Pickford.

The England national team made 3 substitutions at once, as Trent Alexander-Arnold, Callum Wilson and Calvin Phillips participated, in place of Kyle Walker, Kane and Declan Rice.

And Rashford managed to score the third goal in the 68th minute, when he got a pass from Phillips, to dribble on the right side inside the penalty area, before he shot into the net.

Wilson kicked off the ball before passing to Rashford, who shot a ball from a short distance towards the near post, which was blocked by Ward in the 72nd minute, before he left the field and replaced Jack Grealish.

Foden came close to scoring the fourth goal in the 77th minute, when he received Bellingham’s pass, but failed in his near attempt, before the ball rebounded to him and he tried to pass to Bellingham to no avail.

The remaining minutes passed quietly, with no real chances on both teams’ goals, except for one in stoppage time, when England defender John Stones hit the crossbar.