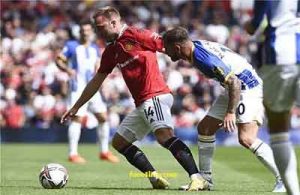 Manchester United midfielder Christian Eriksen was named Red Devils Player of the Month for the month of September.

the official United account on Twitter stated that Eriksen won the award for the best in September, based on the vote of the fans, due to his distinguished performance with the team.

Christian participated in 4 matches in various tournaments with Manchester in the English Premier League and the European League, where he managed to score two goals against Arsenal and Sheriff.

It is worth noting that Manchester played only 4 matches during the month of September, including two league matches and the same in the Europa League, while the Crystal Palace and Leeds United matches were postponed, for reasons related to the death of Queen Elizabeth II.