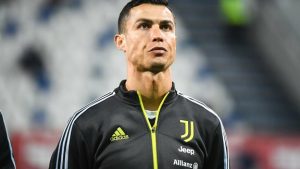 Ronaldo ends doubts about his future with Juventus?

Ronaldo’s contract with Juve expires in the summer of 2022, and many reports claimed that the Madeira missile may not complete his career with the Juventus.

And the “Football Italy” website published a video of the arrival of Ronaldo’s private plane, this afternoon, to Castel Airport in Turin, to start the preparation period with Juventus.

He indicated that Ronaldo will start training, tomorrow, Monday, in preparation for his fourth season in the Juventus’s shirt.

It is noteworthy that Ronaldo was linked to move to Paris Saint-Germain and Manchester United during the current summer Mercato, but his arrival in Turino today will end this news.

It is noteworthy that Pavel Nedved, Juventus Vice President, confirmed today that the Portuguese Cristiano Ronaldo, the star and top scorer of Juventus, will remain in the team in the new season.

He continued, “It would be my pleasure to let Dybala and Ronaldo play together. The Don will stay with us.”

Watch all your preferred matches on our website foot4live with HD/SD quality for free, you can use your internet while on work or at home and enjoy your team football match.