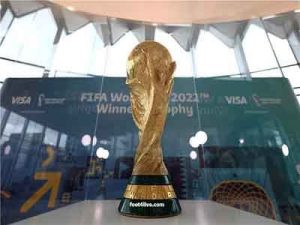 FIFA confirms change to World Cup start date :
The 2022 World Cup will start one day earlier than originally scheduled to allow Qatar to face Ecuador in the opening match.

As originally scheduled, Qatar would have opened their first World Cup campaign on Monday November 21, with Senegal and the Netherlands getting the competition underway earlier.

According to the FIFA Council’s Bureau, Felix Sanchez’s Qatar team will now kick off the tournament on Sunday, November 20 at 7pm local time, continuing the tradition of the home team playing first.

“The FIFA World Cup 2022 will kick off with an even greater celebration for local and international fans as Qatar will now play Ecuador on Sunday, 20 November as part of a stand-alone event,” said FIFA in a statement. The opening ceremony was also moved forward a day to November 20.”
“The change ensures continuity of the long-standing tradition of marking the start of the FIFA World Cup with an opening ceremony on the day of the first match between the hosts and the defending champions.”
After assessing the competition and operational implications and consulting with key stakeholders and the host country, the decision was taken.”

The decision means the Netherlands’ fixture against Senegal has been moved to a later time slot on November 21, following on from England’s Group B opener versus Iran. Jurgen Klinsmann’s team has played the opening match of the tournament since 2006, when they defeated Costa Rica 4-1.

As in the 1974 and 2002 World Cups, the defending champion opened the tournament, with France infamously going down to Senegal in the last World Cup.