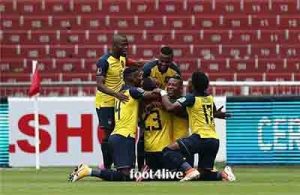 The International Football Association Appeal Committee (FIFA) rejected the appeals of Chile and Peru against Ecuador, over the involvement of player Peron Castillo with the national team during the qualifying stage for the World Cup “Qatar 2022”.

Thus, the committee confirmed the qualification of the Ecuador team to participate in the midst of the World Cup finals.

“According to the documents submitted, it has been assessed that the player should be considered a permanent holder of Ecuadorean citizenship, in accordance with Article 5 of Section I of the Regulations for the Application of the FIFA Rules,” the commission said.

The committee announced the closure of the case and upheld the decision of the Disciplinary Committee, which last June rejected the appeals of Chile and Peru.

Both Chile and Peru had appealed to the Appeals Committee against the decision of the Disciplinary Committee, regarding the possible application of the rules of calling up players to Peron Castillo to participate with the Ecuador national team.

Chile claims that the player was born in Colombia on June 25, 1995, as Perón Javier Castillo, according to his birth certificate, and not as Peron David Castillo, born on November 10, 1998, as it appears in the civil registry of Ecuador.

Doubts about the origin of Castillo, the Mexican Leon player, had been present in Ecuador since the beginning of his career, but it ended in 2021 when a judge ordered his registration as an Ecuadorean citizen and his Ecuadorean birth documents.

Since then, he has been called up to the first team and participated in 8 matches in the Qatar World Cup qualifiers.

Ecuador plays in Group A of the Qatar World Cup with the host country, as well as Senegal and the Netherlands.