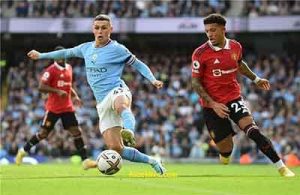 Manchester City finished the first half of the derby against its guest United, with a clean four-point lead at the Etihad Stadium, signed by Halland and Phil Foden.

Haaland became the first player to contribute to scoring 17 goals in the first 10 matches of the Premier League, by scoring 14 goals and making 3 goals, and this comes in light of his participation in 8 matches, according to “Squawka” numbers.

Haaland became the first player to score 14 goals in his first 10 matches in the Premier League.

Foden scored his 50th goal for Manchester City in all competitions, becoming at the age of 22 years and 127 days, the youngest player to reach 50 goals under Pep Guardiola’s leadership, surpassing Lionel Messi at 22 years and 164 days.