France loses from Denmark, and survives relegation in the Nations League 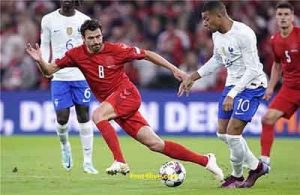 The French national team fell again against its Danish counterpart, with two goals without a response, today, Sunday, at the end of European Nations League, first round.

Kasper Dolberg and Skov Olsen scored the two goals, in the 34th and 39th minutes, to confirm the Vikings’ superiority in direct confrontations for the third time in a row.

Denmark beat France back and forth, to raise its score to 12 points in second place, and the ticket to qualify for the semi-finals, which went to Croatia by defeating Austria (3-1), was lost.

On the other hand, France’s balance froze at 5 points in third place, a point behind the bottom Austria team, as the roosters survived from relegation to the second level.

The world champions pressed hard in the first 20 minutes, but they did not take advantage of this awakening, and did not pose a sufficient threat to Kasper Schmeichel’s goal.

The closest opportunity was an attempt by Griezmann after a distinguished teamwork between Mbappe and Ferland Mendy.

Then Eduardo Camavinga hit more than one ineffective shot, and Joachim Miley almost turned Chuamini’s cross into his own net.

Denmark entered the atmosphere of the match late, but posed a very serious threat to Areola’s goal, which Skov Olsen started by wasting complete privacy, but the referee indicated offside.

The French defense suffered a lot in front of Christian Eriksen’s excellence in executing corner kicks, and Delaney’s mastery of headers, while Areola removed another opportunity.

The Roosters did not pay attention to the next danger, as they conceded two goals in less than 6 minutes, the first of them for Dolberg after a perfect cross from Damsgaard.

From a corner kick, played by Eriksen, and paved by Delaney, Skov Olsen met the ball with a powerful shot past Areola, scoring the second goal.

France coach Didier Deschamps moved to improve the image with two substitutions at the start of the second half, with Jonathan Clos and Wesley Fofana replacing Saliba and Camavinga.

The Danish team almost deepened the wounds of its guest with a third goal, but Areola saved the situation by blocking a dangerous opportunity from the annoying, Skov Olsen.

After 20 minutes, Deschamps pushed young striker Christopher Nkunku, in the place of the absent Olivier Giroud.

The French team woke up relatively, but Kylian Mbappe missed 3 achieved opportunities within 5 minutes, including a complete unilateral response from Schmeichel, who also caught another attempt from Griezmann.

The guests did not take advantage of the opportunity again, and Colo Mwany participated in Griezmann’s place, while the Danish substitute Martin Braithwaite almost scored a third goal, but the ball went to the arms of Areola before the referee blew the final whistle.