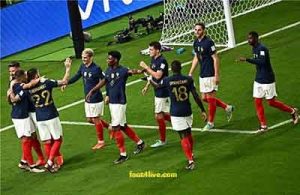 The French national team punished its Australian counterpart, defeating them (4-1), on Tuesday, in the first round of Group D, for the 2022 World Cup, currently held in Qatar.

Craig Goodwin advanced to Australia in the 9th minute, and the defending champion responded with a four-goal scored by Adrien Rabiot, Olivier Giroud, “two goals” and Kylian Mbappe in the 27th, 32nd, 68th and 71st minutes.

The French national team achieved the first 3 points, to top the group, benefiting from a goalless draw between Denmark and Tunisia.

France coach Didier Deschamps relied on a different attacking combination, with the presence of the trio Mbappe, Osman Dembele and Giroud, while Griezmann was positioned as a third midfielder next to Rabiot and Choameni.

The starting scenario was shocking to the world champions, as the roosters received an early goal scored by Goodwin after a cross from Matthew Leakey, who hit Lucas Hernandez with a deceptive dribble in the same attack.

Deschamps was forced to lose his first substitution in the 12th minute, as Lucas Hernandez came out, and his brother, “Theo”, entered Milan’s left back.

The roosters were relatively confused after the goal and the impressive injury, and the Australian national team took advantage of the opportunity, and Mitchell Duke almost scored a second goal after a long-range shot that passed near the post.

The French national team gradually entered the atmosphere of the meeting until it managed to equalize from a Theo Hernandez cross. Rabiot met it with a header into the net.

Before the Kangaroos woke up from the shock of the tie, Rabiot left a second mark, this time making a second goal for his colleague Giroud, after which the French national team threatened its opponent with two attempts from Griezmann and Dembele.

However, the most dangerous opportunity was missed by Kylian Mbappe, who received a cross from Griezmann, but the PSG striker hit the ball hard outside the goal.

Fate almost punished the French stars, but the post saved them after blocking a header from Jackson Irvin in stoppage time.

A useful hitter, Theo Hernandez shone brightly, and was a constant annoyance to the Australian defense with his runs and crosses from the left in the second half, which went in one direction.

Theo presented a gift to Jiro, which he received with a scissor kick next to the post, and another to Griezmann, which the Australian defense narrowly removed from the goal line.

In just 3 minutes, the 2018 World Cup champion finished off his opponent, as Mbappe added the third goal after a cross from Dembele, then it was Mbappe’s turn to make a fourth goal, for Giroud, making him the historic scorer for France, equally with Thierry Henry (51 goals).

Didier Deschamps breathed a sigh of relief, and moved to revitalize his ranks after securing victory clinically. Youssef Fofana and Kingsley Coman replaced Choameni and Dembele in the last quarter of an hour, and in the final minutes Marcus Thuram and Conde took the place of Giroud and Pavard.

The French national team could have widened the difference, but Australian goalkeeper Mathieu Ryan saved his goal from two chances for Ibrahima Konate and Theo Hernandez.

On the other hand, the Australian players looked like ghosts with yellow shirts throughout the second half, so that French goalkeeper Hugo Lloris turned into a “guest of honor” for the match, so that France began the title defense campaign with a great victory and a distinguished technical display.