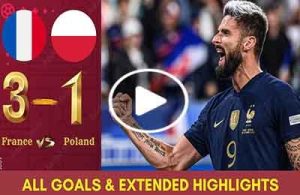 The French national team continued its campaign to defend the World Cup title, beating Poland by 3 goals today, Sunday, to qualify the roosters for the quarter-finals.

Olivier Giroud and Kylian Mbappe scored a “double” in the 44th, 74th and 91st minutes, while Robert Lewandowski scored Poland’s only goal from a penalty kick in the 99th minute.

The roosters owe this victory to his young star, Kylian Mbappe, who scored a goal and scored two goals, to qualify the world champions to meet the winner of the England match against Senegal.

It is also interesting that the French national team fulfilled the prophecy of the President of the Republic, Emmanuel Macron, who predicted victory over Poland (3-1) with the same players who scored the four goals.

France coach Didier Deschamps pushed his striking force, relying on the 4-2-3-1 plan, and the roosters pressed with full force from the first minutes and threatened the Polish goal with more than one dangerous attempt.

In the 29th minute, Olivier Giroud missed a goal by following the ball outside the empty goal of his Polish goalkeeper, after a cross pass from Dembele.

The Polish attempts were few, but very dangerous, as Lewandowski hit a powerful ball near the post, while Hugo Lloris saved his goal from a goal in front of Zelinski’s shot from inside the penalty area.

The same attack bounced off the Polish striker Kaminski to hit a ball that the French defense cleared from the goal line, in addition to another attempt by the same player into the net from outside.

And the roosters translated the advantage with a goal in the last seconds of the first half, which Giroud scored to become the historic scorer for the French national team, benefiting from Kylian Mbappe’s pass.

The French national team tried to consolidate its superiority with a second goal early in the second half, and reached the goal of Poland with more than one dangerous attempt by Griezmann, Jiro and Kylian Mbappe.

The Poland national team absorbed the French enthusiasm, and its coach began to gradually activate the ranks in pursuit of the equalizer, as Milik, Zaleski and Belek participated in the place of Krychowiak, Szymanski and Kaminski.

Lewandowski’s comrades rushed offensively, leaving wide spaces in the counter-attacks, so that Osman Dembele launched the ball and passed it to Mbappe, so that the latter hit Chesney’s net with force, scoring the second goal.

Despair poured into the hearts of the Polish players, to concede a third goal from a wonderful shot by Mbappe in the left scissors, after a pass from his colleague Marcus Thuram.

The excitement did not stop at this point, but the referee awarded a penalty kick to Poland after resorting to video technology that proved the presence of a handball against Upamecano, to be shot by Lewandowski and Loris tackled it before the referee returned it, so that the Barcelona striker scored an honorary goal for Poland before the final whistle, and President Macron’s prophecy was fulfilled to the fullest.