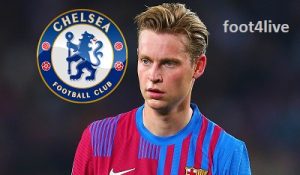 English newspapers this morning published, Thursday, were interested in Chelsea’s approach to signing Frenkie de Jong from Barcelona, ​​as well as highlighting the thinking of Manchester United fans to boycott the team’s upcoming match at Old Trafford.

As know now that Frenkie is very close to Chelsea and all will be clear in the few next days.

The newspaper “Mirror” titled: “He returned after 33 years .. Michael Knighton claims that he will make an offer to control the Reds from the Glazers,” referring to the purchase of Manchester United.

At the top, the newspapers wrote: “Silva: There is no way to know if I will stay,” therefore, referring to Bernado Silva’s future with Manchester City.

On the side, the headline: “Chelsea’s agreement with De Jong for 71 million pounds.”

The newspaper also wrote: “Introducing the start date of the World Cup.”

As for the “Daily Mail” newspaper, the headline: “Chelsea coach Tuchel wants the Barca star to strengthen his attacking power,” referring to Pierre-Emerick Aubameyang.