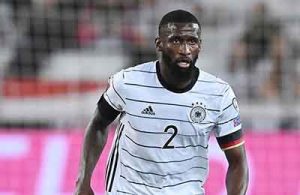 The German Football Association announced today, Saturday, the departure of the defender of the German national team, Antonio Rudiger, from the team camp, and his return to Real Madrid.

The German Federation issued an official statement, in which it said: “As a result of Rudiger being suspended due to the accumulation of cards, and Lucas Nemesha’s knee injury, it was decided that they return to their teams and not play the next match against England.”

Germany will visit England next Monday at Wembley Stadium in the sixth and final round of the group stage of the European Nations League.

On Friday, Germany lost to Hungary, with a goal without a response.

Rudiger joined Real Madrid last summer, in a free transfer deal, after the expiration of his contract with Chelsea.