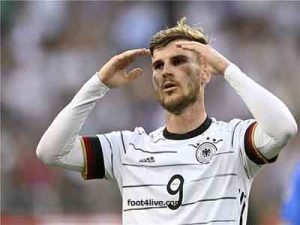 Germany striker Timo Werner returns to Leipzig :
On Tuesday, RB Leipzig announced that Timo Werner will return to the club from Premier League side Chelsea on a four-year contract until 2026.

It was reported that the transfer to the German Cup winners had been settled for €20 million ($20.4 million) plus bonuses.

As Werner said in RB Leipzig’s statement, “I am very grateful for the two great years I had at Chelsea FC, during which we won the Champions League. I learned a lot about playing in another country and another league”

RB consortium’s private plane brought Werner, 26, to Leipzig on Monday evening. His fans waited for him at a hotel in Leipzig center after he was picked up on the tarmac.

After four years with Leipzig, Werner moved to Chelsea for around €55 million in 2020.

In 2021, he won the Champions League with Chelsea but has struggled for game time and wants to leave the club to protect his Germany place at the World Cup.

You may follow Premier League News at Foot4live and esoccer.news and Germany striker Timo Werner News