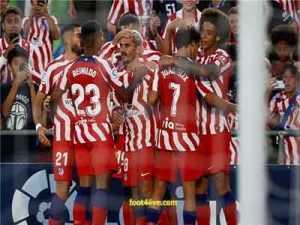 Diego Simeone’s side kicked off their campaign at Coliseum Alfonso Perez with two goals by the Spain international Alvaro Morata. Antoine Griezmann added the third.

Sanchez Flores may feel the final scoreline did his team a disservice, but the Rojiblancos will look back on this opening weekend with pride.

Even in the stifling evening temperatures of the Iberian Peninsula, this local encounter remained cagey throughout, punctuated by occasional flashes of brilliance.

Atletico opened the scoring with one of these sublime passages of interplay, with Morata receiving a succession of passes down the middle before finishing low past David Soria.

After the break, Carles Alena fired a long-range attempt just over the crossbar, while Borja Mayoral rattled the crossbar, but otherwise both teams appeared to prefer a more physical approach.

While Getafe remained fiercely competitive, just shy of the hour mark, Joao Felix picked off a poor pass from the back to send Morata through again.
After Mayoral’s header hit the post with a quarter hour to spare, Griezmann’s breakaway finish confirmed the victory – and set the stage for another exciting title race.