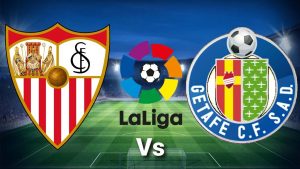 The date of the match between Seville and Getafe today 23-8-2021 La Liga and the carrier channels
The Getafe team will host its counterpart Sevilla in a match, as part of the matches of the second round of the Spanish Football League. , While Getafe is trying to win and compensate for its loss in its match in the last round.

On the other hand, the Sevilla team enters today’s match against Getafe, to calculate the matches of the second round of the Spanish League. The Seville team scored three goals without a response, and before that, the Seville team had drawn in the last friendly match it played, and it was against the Roma team, and that match ended in a goalless draw.

As for the Seville team, it is expected to start today’s match with a squad that will include
Goalkeeper: Yassine Bounou
Defense Line: Jesus Navas, Conde, Diego Carlos, Escudero
Midfield: Rakitic, Fernando, Jordan
In the offensive line: Suso, Luc de Jong, Ocampos.