Good news for Manchester United before the derby 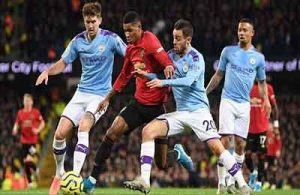 Manchester United received encouraging news, before its expected confrontation with its neighbor, Manchester City, next Sunday evening, in the English Premier League, ninth round .

The newspaper “The Sun” reported on its website, that Manchester United player Marcus Rashford has become a candidate to be fit for the Manchester derby, after recovering from injury.

The Manchester United striker has been out since suffering a hamstring injury during United’s 3-1 victory over leaders Arsenal, and Rashford scored two goals in that match, as he scored in a 2-1 win over arch-rivals Liverpool.

This brilliance came after a difficult year during which he struggled to regain his best level, under the leadership of former coaches Ole Gunnar Solskjaer and Ralf Rangnick.

But the injury made him miss the two matches of United in the European League against Real Sociedad and Sheriff Tiraspol, and made him unavailable to the England national team, after it was expected that he would be called up due to his improved performance.