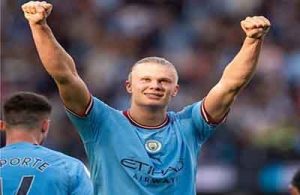 Manchester City coach Pep Guardiola spoke about his team’s match against Borussia Dortmund, tomorrow, Tuesday, in the fifth round of the Champions League group stage.

Guardiola started the match press conference, today, Monday, by talking about the difficulty of Dortmund, saying: “A good team, and because we are Manchester City, things will not be easy.”

He added: “In the big matches against Bayern Munich they always give a high level, we have a lot of respect for them, we suffered in the first match against them in the first half, and it improved in the second half, we know that we need to give our best to beat them.”

On the difference between current players and previous generations, he added: “The thing is one, a good player remains good, perhaps the difference is the presence of mobile phones in the dressing rooms, and apart from that there is no difference, good players from Cruyff and Beckenbauer are everywhere.”

Turning to the Dortmund stadium, he said: “It is a wonderful stadium and everyone knows it. The atmosphere is good and they play attractive football. When I was in Germany, I faced Klopp and Tuchel and I always played difficult matches, and I am happy to return, 3 years ago we played without fans, and it was one of the outstanding matches.” In my career with City.

And he added: “He arrived here at the age of 17, and it was not just about quality, but with his own mentality, he is one of the leaders in the team, and to happen at 19 years old, that is amazing, he plays for England already, we know his quality.”

Looking at what Erling Halland did and did not expect, he said: “I did not know his quality in moving in small spaces inside the penalty area, he scores a lot of goals in the area, and these are not easy moves for the striker.”

He added, “Apart from that, I love his work ethic, as he is among the first to arrive at training, among the last to leave, takes care of his body, knows how to live professionally and has the desire to improve.”

He also praised Ilkay Gundogan, saying: “He is the first player I signed with, and I am happy and fortunate for any coach to have a player like him. “.