Haaland competes with Lewandowski for the throne of the Bundesliga 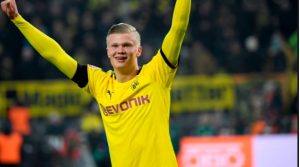 Haaland competes with Lewandowski for the throne of the Bundesliga

Norwegian Erling Haaland led his team, Borussia Dortmund, to victory over its guest Union Berlin (4-2), today, Sunday, in the fifth round of the German League.

The 21-year-old scored two goals for the Festival Lions, in the 24th and 83rd minutes, to raise his score to 7 goals in the Bundesliga this season.

Thus, Haaland shared the top scorer of the Bundesliga, with Polish striker Robert Lewandowski, Bayern Munich, who has not stopped scoring since the beginning of the season.

The “Bleacher Report” network indicated that the Norwegian international reached 68 goals, in only 67 matches with the German team, in various tournaments.

Haaland managed to visit all Dortmund’s opponents in the German league this season, with the exception of Freiburg in the second round, which caused his team’s loss (1-2).