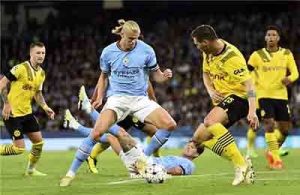 Manchester City escaped the surprises of their guest, Borussia Dortmund, beating them 2-1 today, Wednesday, in the second round of the group stage of the European Champions League.

Man City scored a double, John Stones and Halland in the 80th and 84th minutes.

Dortmund’s only goal was scored by Judd Bellingham in the 56th minute.

Manchester City maintained the lead in Group G with a full score of 6 points, while Dortmund’s balance froze at 3 points in the runner-up.

The first attempt in favor of Manchester City came in the third minute, after Mahrez penetrated into the right side, hitting a ground ball that Mayer grabbed.

Dortmund responded in the 16th minute, with a powerful shot from Ozkan, from the edge of the area, which goalkeeper Ederson caught.

City appeared offensive again in the 26th minute, with Cancelo’s shot from outside the penalty area, which went wide of the goal.

In the following minutes, Man City was satisfied with the passive possession of the ball, without posing a significant danger on the goal, so that the first half ended in a goalless draw.

With the beginning of the second half, Dortmund missed an opportunity to open the scoring in the 52nd minute, after Royce received Binya from Ozkan inside the area, to manipulate Akanji before he hit a ball that passed next to the post.

Dortmund opened the scoring in the 56th minute, after Bellingham followed a shot from Royce from inside the area, to change its direction with a header that shook Ederson’s net.

After the goal, Guardiola quickly intervened by making 3 substitutions at once in search of correcting the situation, with Foden, Bernardo and Alvarez descending at the expense of Mahrez, Gundogan and Grealish.

City tried to score a tie, after De Bruyne sent Haaland into the penalty area in the 66th minute, to hit the Norwegian with a powerful ball that hit the post.

And Man City managed to adjust the result in the 80th minute, after Stones fired a missile from the edge of the penalty area, which inhabited the Dortmund net.

And soon, Manchester City added the second goal in the 84th minute, after Cancelo sent a distinctive cross outside the foot, which Haaland received with a direct shot on the bird from inside the area and into the net.

Dortmund looked for a quick equalizer, after Reus sent a cross to Meunier inside the area in the 85th minute, and the latter hit a direct ball that passed next to the post.

And Man City almost added the third goal in the 89th minute, with a powerful ground shot from Alvarez from inside the area, the Dortmund goalkeeper excelled in addressing it.

In the third minute of stoppage time, Melin Stones and Phillips manipulated on the left side of the penalty area, before firing a ball past the post, ending the match with the victory of the hosts.