Haaland: The Premier League is different than Bundesliga, and The title of best doesn’t matter to me 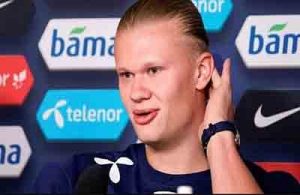 Haaland said, in statements highlighted by the British newspaper “The Sun”: “I want to develop, win matches and championships, and have a good time. I love the Champions League, I must say that.”

he added “Everyone knows this, and the Champions League is a big dream for me,”

Haaland is famous for putting the Champions League anthem as an “alert ringtone” on his phone.

The Norwegian commented on this, saying, “When I wake up every morning, I listen to this song… It’s my favorite tournament, I’ve always loved it.”

And he added: “Every player’s dream is to become the best, but I don’t think about that, I just think about the next step, and I try to be a little better every day.. This is important to help the team, and then other things will come.”

He added: “Playing in the Premier League is a little different, but of course they are two great leagues (the English and German leagues).”

Haaland added: “The Premier League is a little bit more physical. It’s a great league, and I enjoy every second of it. I’ve been watching it all my life. Being here now is exceptional for me. I like that there are a lot of good teams.”

He concluded: “Every match is very difficult, and you never know what the match will be like… There are many big teams, and this is also something I love.”