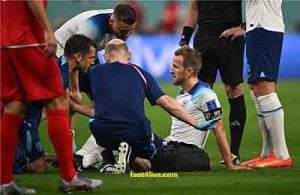 The English star Harry Kane worried the fans of the Three Lions after their first match in the 2022 World Cup in Qatar, where they swept Iran.

The England national team achieved a wide victory over Iran, 6-2, today, Monday, in the first round matches of Group Two in the Qatar World Cup 2022.

According to the British newspaper “Express”, Kane was seen walking down the corridor leading to the dressing room with his ankle tied, and he was “limping slightly”.

Harry Kane did not complete the match, and left the field in the 75th minute.

Despite this, the newspaper added, “Harry Kane told reporters that he was fine.”

The England national team will play the second round match against the United States at Al-Bayt Stadium next Friday, while Iran will play against Wales at Ahmed Bin Ali Stadium on the same day.