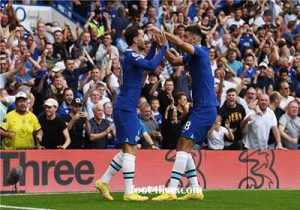 Chelsea won an exciting victory at the expense of its guest West Ham, 2-1, on Saturday evening, in the match that was held at Stamford Bridge in the sixth round of the English Premier League.

With that result, Chelsea raised its score to 10 points to rise to fifth place, while West Ham’s balance froze at 4 points in 17th place.

The first attempt in the match came in favor of Chelsea in the 28th minute, after James penetrated into the right side, sending a cross that was pushed away by West Ham’s defense, to be followed by Pulisic with a shot from inside the area, which collided with the defense and passed next to the post.

Chelsea reappeared in the 31st minute, with a powerful shot from Kovacic from the edge of the penalty area, which also passed a little near the post.

West Ham almost opened the scoring in the 39th minute, with a shot on the bird from Fornals from the border of the area, which just passed next to the post, so that the first half ended in a goalless draw.

Chelsea started the second half with a shot from Fofana from outside the penalty area in the 49th minute, which went wide of the goal.

In the 62nd minute, Mendy pushed a cross from a corner kick, followed by Bowen with a shot at the bird from outside the area, the Senegalese goalkeeper starred in deporting it to a corner kick.

From that corner, Mendy was confused by removing a cross, paving the way for Rice, who in turn passed it to Antonio inside the 6-yard area, and the latter easily hit the ball into the net, announcing the progress of West Ham in the 63rd minute.

Chelsea managed to adjust the result in the 76th minute, after Silva sent a longitudinal cross into the penalty area, which was received by substitute Ben Chilwell with a head and then hit a ball from between the feet of goalkeeper Fabianski and into the net.

West Ham almost snatched the victory points in the 88th minute, after Benrahma sent a cross from the left side, followed by Cornet, free of censorship inside the area, with a header that hit the post.

Chelsea stunned its guest by scoring a killer goal immediately after Havertz followed a cross from Ben Chilwell from the left side, firing a direct shot into Fabiansky’s net.

Chelsea was not very happy, as West Ham immediately managed to score the equalizer, after James made a mistake in returning the ball back, to put pressure on Bowen Mendy, who did not manage to clear the ball, Cornet broke it and scored in the net.

The referee then decided to cancel the goal after referring to the VAR technique, which showed that Bowen had violated Mendy, and the match ended with Chelsea winning (2-1).