Hazard is wanted in the Premier League 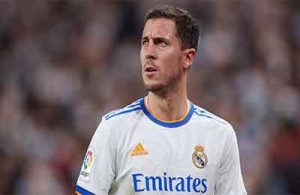 Hazard has suffered a series of injuries since joining Real Madrid in the summer of 2019, coming from Chelsea, for 115 million euros.

According to the Spanish “Defense Central” website, Unai Emery, the new coach of Aston Villa, asked the club’s management to include Hazard in the next winter Mercato.

The report added that the Villains are seeking to persuade Hazard to leave Real Madrid, in order to participate mainly and restore his usual level.

He pointed out that Real Madrid does not mind selling Hazard, provided that he obtains an appropriate financial value.

Hazard participated with Real Madrid in only 6 matches, since the beginning of the season, and managed to score one goal and assist another.