Historic record for Haaland in the Premier League 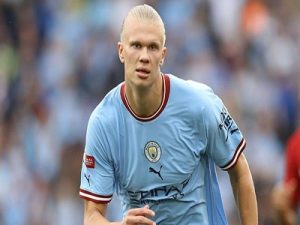 Norwegian star Erling Haaland scored three goals for his team, Manchester City, in the first half against Nottingham Forest, on Wednesday evening, in the fifth round of the English Premier League.

The first goal came in the 12th minute, when he met Phil Foden’s cross pass into the penalty area, with his foot into the net.

The second goal came in the 24th minute, when Halland passed the ball to Foden, but the defense cut it in front of the latter, to return to the Norwegian striker, who calmly put it in the goal.

Halland scored the third goal in the 38th minute, following a header of Stones’ header as well.

This is the second “hat-trick” scored by Haaland, after his hat-trick against Crystal Palace (4-2), in the fourth round of the competition.

According to the Opta network, Haaland became the first player in the history of the Premier League to score 9 goals in his first 5 matches in the competition, surpassing former City player Sergio Aguero and former English player Mickey Quinn (8 goals each).