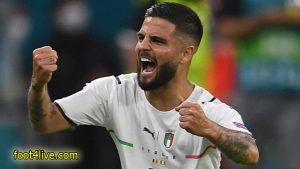 Insigne: I’ve never played with this smile.. thanks to one person

Italian striker Lorenzo Insigne praised the coach of the national team, Roberto Mancini, noting that he spread an atmosphere of fun in the ranks of the Azzurri, which enabled him personally to perform his best performance in the “Euro 2020” tournament.

Insigne scored a beautiful goal to qualify Italy for the semi-finals of the European Championship, after a 2-1 victory over Belgium, ranked number one in the world, in the quarter-finals last night.

“I’m really excited,” Insigne said. “I’ve never played with such a big smile on my face. It’s like playing with my teammates on a normal day.”

He added: “All the credit for that goes to the coach, because he is the one who made us give the best performance. Everyone, including myself, plays with a smile. This is the secret of our success.”

And he added, “I am very happy with what the whole team is doing, because we have proven that we are a great team and a lot of credit for that goes to the coach.”

He concluded: “All we have to do is continue, because we haven’t achieved anything yet. We still have a lot to do.”

Italy will meet Spain in the semi-finals at Wembley Stadium in London next Tuesday.