Inter Milan puts the Barcelona star on his requests list 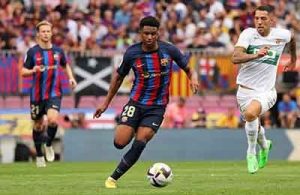 An Italian press report said that Inter Milan is planning to kidnap one of the most prominent talents in Barcelona during the current period.

Inter Milan suffers in the left-back position, and seeks to strengthen strongly due to the technical staff dissatisfaction with the performance of Gossens, and Demarco presence alone without competition.

According to the Italian newspaper, Calciomercato, Inter Milan is targeting Barcelona left-back Alejandro Baldi, who has been following the Nerazzurri for a long time.

Baldi succeeded in appearing at a distinguished level, which prompted his coach, Xavi Hernandez, to rely on him at the expense of Jordi Alba and Marcos Alonso.

Baldi has a contract with Barcelona until the summer of 2024, and the club is ready to renew his contract in the long term, but Inter Milan will try to tempt Baldi in the summer to leave the Blaugrana.

Baldi signed his last renewal contract with Barcelona in the summer of 2021, and he has a release clause in his contract worth 500 million euros.