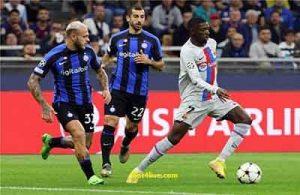 Inter Milan snatched a difficult victory from its guest Barcelona, ​​1-0, in the match that was held this evening at the San Siro stadium, in the European Champions League, group stage .

Hakan Calhangulu scored the game’s only goal in the 45+2 minute, inflicting Barcelona’s second consecutive defeat in the group and complicating its position.

With this victory, Inter raised its score to 6 points in second place behind leaders Bayern Munich (9 points), while Barcelona’s balance froze at 3 points in third place.

Inter almost scored an early goal after a quick counter-attack in the sixth minute, which was pushed away by Barcelona’s defense to reach Calhangulu, who fired a missile shot from a distance, in which Barcelona goalkeeper Ter Stegen shone, who pushed it away with his fingertips to a corner.

In the 14th minute, Barcelona got a corner kick executed inside the area, to find Christensen, who met the cross header towards the goal, but it was weak to reach easily into the hands of goalkeeper Onana.

The 20th minute witnessed many objections from the Inter players, after a hand touch to the Barcelona defender inside the area, the referee decided to continue playing, before returning to the video technology that revealed the presence of an offside case on Laotaro before the hand touch.

In the 28th minute, Correa scored the first goal in the match for Inter, after a pass deep into the defense to Korea, who started from the middle of the field to evade goalkeeper Stegen and put the ball into the net, but the referee canceled it for offside.

Pedri, the Barcelona midfielder, passed superbly from the middle of Inter to run and pass the ball to Dembele on the left side, to dodge Calhangulu and launch a powerful shot that hits the side netting of the Inter goal in the 36th minute.

In the 45+2 minute, Inter scored the first goal in the match after a quick ball by the Nerazzurri from the right side of Darmian dispersed the defense to reach Demarco on the left side, to pass it to Calhangulu in front of the penalty area.

Inter coach Simone Inzaghi made the first substitution in the 56th minute with Joaquin Correa leaving and Dzeko going, with Joaquin suffering from an injury in the first half.

Dembele, who moved to the left front, almost scored a equalizer for Barcelona in the 60th minute, after receiving the ball inside the area to launch a missile shot in which Onana starred to touch his hand and hit the right post.

Pedri managed in the 67th minute to equalize the score for Barca after a game that reached Dembele on the right side, who passed a cross into the area.

The referee returned to the video technology, to decide to cancel the goal due to the presence of a hand touch on the substitute Ansu Fati, after the ball touched his hand before it reached Pedri.

Barcelona defender Eric Garcia saved his team’s goal from the chance of a Nerazzurri goal, after a counter-attack passed by Barilla with a magic ball deep into the defense to Lautaro, who was almost alone with the goal had it not been for Garcia’s intervention, who successfully removed the ball.

In the 85th minute, Barca got a corner kick from the left, which was executed inside the area to pass in front of everyone, and almost hit Dumfries in front of his team’s goal, but the defender managed to get away with great difficulty in front of the ball to pass outside the field for a corner.

Gerard Pique missed a great opportunity to adjust the result in the 88th minute, after a fixed free kick from outside the area, executed by Dembele inside the area, to be matched by Pique with an excellent header, but it went wide of the goal.