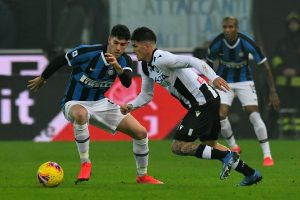 Inter Milan’s goal in the next match is victory and nothing else, in order to continue its uprising in the Italian League, after winning its last match against Empoli, with two goals without a response.

And the Nerazzurri wants to continue chasing both Napoli and Milan, in light of the difficult competition for the top of the Italian league table, this season.

Napoli leads the local league standings, with 28 points, a difference of points from the runners-up Milan.

As for Inter Milan, it is in third place, with 21 points, after winning 6 matches, drawing in 3 matches, and losing in one match.

Udinese will also try to achieve a positive result from the match, in order to improve its position in the standings, as it is currently in 14th place with 11 points.

What time is the Inter Milan vs Udinese match?
The “San Siro (Giuseppe Meazza)” stadium will host the confrontation that will bring together Inter Milan and Udinese, on Sunday evening 10/31/2021 in the 11th round of Calcio.

What are the channels streaming the Inter Milan vs Udinese match?
The match between Inter Milan and Udinese will be broadcast via the Italian Federation channel on the social networking platform “YouTube”.