Italy defeats Hungary and qualifies for the Nations League semi-finals 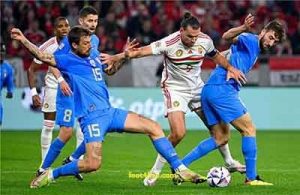 The Italian national team qualified for the European Nations League semi-finals defeating Hungary, with two clean goals, today, Monday, in the last round of the group stage competitions.

Giacomo Rasbadori and Federico Demarco scored the Azzurri’s goals in the 27th and 52nd minutes.

With this victory, the Italian team raised its score to 11 points at the top of the standings and qualified for the semi-finals, while the Hungarian team finished second with 10 points.

Hungarian goalkeeper Gulacsi almost made a fatal mistake in the fifth minute, after Cristante crossed into the Hungarian team penalty area, so the goalkeeper tried to catch it, but it passed through his hands, and defender Szalay managed to clear it from the goal line.

The Italian team got a free kick from the middle of the field to the left, carried out by Rasbadori with a cross inside the area, met by Di Lorenzo with a dangerous header that passed next to the left post of the Hungarian goalkeeper.

Among the many errors in passing in the back of Hungary, Adam Nagy passed the ball to his goalkeeper amid pressure from the Azzurri striker Gontoto, so the goalkeeper made a mistake in the pass and Rasbadori got the ball in front of the goal and entered the net in the 27th minute.

In the 31st minute, Di Lorenzo was close to doubling the score after a superb shot from inside the area that almost went into the far corner but passed next to the post.

And the Hungarian team had a triple opportunity at the start of the second half, after a shot from inside the area from Szoboszlai, which was blocked by Donnarumma to bounce and Nigo followed it up with another shot that the defense pushed out of the area and found Szalay, who fired a powerful shot, which was sent away by Donnarumma again.

In the 52nd minute, Demarco doubled the score for the Azzurri after a superb pass from Barilla to Cristante, who passed it inside the six yards, and Demarco followed it into the net.

The Hungarian team tried to reduce the result, and in the 63rd minute, the ball reached substitute Steele, who fired a shot from the edge of the penalty area that hit defender Bonucci, before Donnarumma brilliantly removed it.

In the 77th minute, Adam Nagy called for a penalty kick after falling inside the area after a contact with Bastoni, but the referee indicated that the game should continue without a violation after returning to the video technology.

The brilliant Demarco was close to crowning his effort with his second and third personal goal for the Azzurri, after he penetrated from the left side into the area and fired a ground missile that was blocked by the goalkeeper, but it bounced back to Di Lorenzo, who shot into the side net.