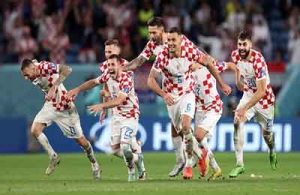 The vice-world champions are still alive. The Croats had to go through penalties but overcame Japan on Monday in the round of 16 (1-1, 1-3 on pens). The Japanese had opened the scoring in the first period by Daizen Maeda, Ivan Perisic answered him at the start of the second. Despite a great intensity, the two teams were unable to decide before the fateful session where the Croatian goalkeeper Dominik Livakovic shone by repelling three attempts. His teammates will challenge the winner of Brazil – South Korea in the quarter-finals.

A surprise guest at this stage of the competition after bringing down Germany and Spain, Japan hoped to do it again but fell short of the Croatian experience. As soon as the opening minutes began, this opposition of style put up a spirited fight. The Japanese’s vivacity and desire were matched by the Vatreni’s collective technical mastery. As the attackers failed to negotiate several interesting situations, Japan unblocked the situation with a corner combination and Maeda scored from close range after a hand-in from Maya Toshida (43rd).

Led on the scoreboard, Croatia raised their tone and level on the restart. Perisic was quick to equalize with a superb crossed header on a long cross from Dejan Lovren from the right (1-1, 55th). The Tottenham player opened his counter in this World Cup but also signed his 7th goal in a World Cup. Long discreet, the master to play Luka Modric also shook himself and asked Shuichi Gonda with a heavy axial strike (63rd).
Faced with a less and less impactful Japan despite the onset, the Croats remained dangerous with a slightly off-target header signed Ante Budimir (66th) and a strike from Perisic deflected in extremis by Takehiro Tomiyasu who replaced Ko Itakura, suspended, and who had to work (77th).

Livakovic hero of the day

Despite this domination of the Vatreni, the two teams went into extra time for the first time in these round of 16. Faced with a Croatia accustomed to this kind of situation, the Japanese of Hajime Moriyasu regained some energy and the incoming Takumi Minamimo stumbled on Livakovic (105th).

The Monegasque, however, started the Samourai Blue penalty shootout badly when an attempt was stopped by the Croatian goalkeeper. His teammates Kaoru Mitoma and Yoshida imitated him against the excellent Livakovic and Mario Pasalic was able to conclude with serenity to send Croatia to the next round. As in 2002, 2010 and 2018, Japan did not manage to cross the 8th finals.