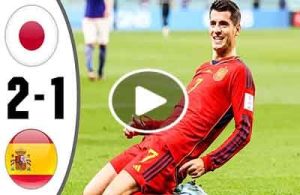 The Japanese national team snatched a pass to the round of 16 in the World Cup “Qatar 2022”, thanks to its exciting victory over its Spanish counterpart (2-1), this evening, Thursday, at Khalifa International Stadium in the last round of Group E matches.

He scored for the Japanese national team Ritsu Doan and Oh Tanaka in the two minutes (48 and 51), while Alvaro Morata scored for Spain in the minute (11).

The Japanese team topped the Group E standings with 6 points, while Spain ranked second with 4 points.

The match started under pressure from the Spaniards, and midfielder Sergio Busquets hit a powerful ball that went over Japan’s goal.

The response came quickly from the Japanese, with a shot from Eto’o that hit the outside net of Unai Simon’s goal in the 7th minute.

And Alvaro Morata succeeded in scoring the goal of progress for Spain, as he received a cross from Azpilicueta and headed a ball into the Japanese net.

Morata almost added the second goal with a powerful shot, but it was blocked by Japanese goalkeeper Gonda, and the first half ended with Spain advancing 1-0.

With the start of the second half, Japan’s Ritsu Doan scored the equalizer for his country in the 48th minute, after a powerful shot past Unai Simon.

O Tanaka added Japan’s second goal in the 53rd minute, as a cross ball reached Mitoma and passed it towards Tanaka, who fired directly into the net.

Asano shot very awkwardly to miss the opportunity to score the third goal, then Itakura received a cross that rose and hit it with the head, but it went easily to Unai Simon.

Marco Asensio almost scored the equalizing goal for the Matador in the 88th minute, with a powerful shot on the edge of the penalty area, which was blocked by the Japanese goalkeeper.

The Spaniards’ attempts to score the equalizer failed in the last minutes, so the Matadors received their first shock in the tournament by qualifying as runners-up and losing the three points.