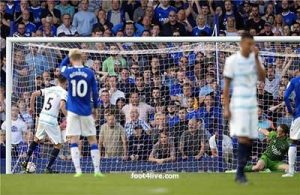 On Saturday, Chelsea’s Premier League season kicked off with a 1-0 victory over Everton thanks to Jorginho’s first-half penalty.

Frank Lampard’s hosts sat deep and frustrated Chelsea early on despite being without a striker due to Dominic Calvert-Lewin’s knee injury and Salomon Rondon’s suspension.

Despite an improved performance after the break, Everton were unable to beat Edouard Mendy despite Jorginho’s penalty on the stroke of half-time.

Despite failing to produce a fluid performance on Merseyside, Chelsea won their Premier League opener for the third consecutive year.

A serious lower-leg injury to Ben Godfrey dealt Everton an early blow, but James Tarkowski’s header forced Mendy into his first meaningful save.

Jorginho converted neatly into the bottom-left corner after Abdoulaye Doucoure hauled Ben Chilwell down as he burst into the area.

Demarai Gray and Doucoure were both denied by strong saves by Mendy as Everton looked to respond after the break.

Chelsea’s experienced rear guard held firm after a medical emergency in the crowd forced a brief stoppage, but ten minutes of extra time were signaled.