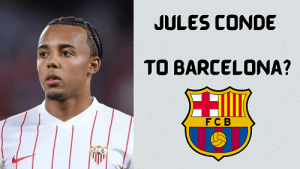 Jules Conde to Barcelona, during this summer’s transfer market?

Barcelona administration is looking to complete a deal for French defender Jules Conde, a Sevilla player.

Chelsea will put pressure on the deal to include Conde for 65 million euros, and a higher salary.

In Barcelona, they trust that Conde will keep his word about playing at the Camp Nou next season.”

According to the newspaper, Barcelona is awaiting the activation of its second economic lever, selling 15% of its audiovisual rights, to present a special offer to Seville.

As part of its strategy to strengthen the defense line after completing the Robert Lewandowski deal.

Barcelona administration believes that the arrival of a player of Conde’s quality will enhance the efficiency of the team, and the club is also trying to include Cesar Azpilicueta and Marcos Alonso from Chelsea.

You may read: The World Cup looms and Werner won’t rule out Chelsea leaving

You may read: De Ligt signs with Bayern Munich :

You may find more daily news at: foot4live.news