Kante is out of the Qatar World Cup 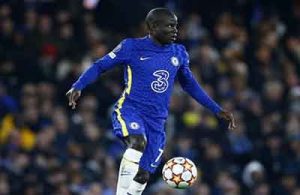 Chelsea midfielder N’Golo Kante has been confirmed to miss the 2022 World Cup.

The next edition of the World Cup will be held in Qatar between November and December of this year.

Chelsea issued an official statement, saying: “N’Golo Kante has undergone surgery on the site of his hamstring injury.”

It added, “After a successful operation, N’Golo is now expected to be out for 4 months.”

Kante has only played two matches with Chelsea this season, against Everton and Tottenham, and has been absent since last August due to injury.

The Blues are scheduled to play 4 important confrontations before the international break. In the English Premier League, they will play Brentford, Manchester United and Brighton, while Dinamo Zagreb will host Croatia in Group 6 of the Champions League.

France is in Group D, which includes: Australia, Denmark and Tunisia, and the Roosters are scheduled to play their first match against Australia on November 22.