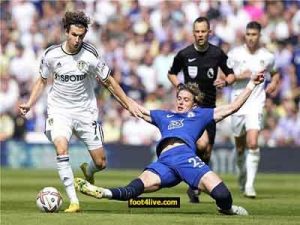 Leeds United won a big victory at the expense of its guest Chelsea, by three goals, today, Sunday, in the match that was held at Island Road in the third round of the English Premier League.

With this result, Leeds raised its score to 7 points to rise to second place, while Chelsea’s balance froze at 4 points to fall to 12th place.

Chelsea started the match strongly, after Sterling manipulated the Leeds defense inside the penalty area in the first minute, before firing a powerful ball that just passed next to the post.

The response came from Leeds in the third minute, through a shot through James from the edge of the area, which went wide of the goal.

Harrison followed him with an arc shot from inside the area, which Mendy grabbed successfully.

Leeds returned to form the danger again in the 20th minute, with a powerful shot from Rodrygo from inside the area, which passed next to the post.

Chelsea almost opened the scoring in the 21st minute, with a penetration from Mont until he reached the penalty area, hitting a ground ball, which Miller narrowly missed to a corner kick.

In the 30th minute, Llorente rose to a cross from a corner kick, shooting a header that went slightly above the crossbar.

Rodrygo tried to surprise Mendy, with a shot from the left side of the penalty area in the 32nd minute, but the Senegalese goalkeeper caught it.

Leeds opened the scoring in the 33rd minute, after a fatal error from Mendy, who tried to trick Aronson, the latter caught the ball and scored it easily into the net.

Leeds quickly added the second goal in the 37th minute, with Rodrygo’s cross-crossing from a foul, hitting an elegant header that hit Mendy’s net.

Chelsea searched to reduce the difference in the 40th minute, after Loftis-Cheek sent a cross cross to Kokorella, free of censorship, inside the area, so that the latter hit a direct ball that passed next to the post.

Aronson hit a ball from outside the area in the second minute of stoppage time, which Mendy grabbed, to end the first half with Leeds ahead with two goals without a response.

Chelsea started the second half strongly, after Mont paved the ball for Cocorella inside the area in the 48th minute, to manipulate Aronson before hitting a ball that went wide of the goal.

Chelsea continued to try to return, with a shot from Gallagher from inside the area in the 57th minute, colliding with the Leeds defense and passing a little near the post.

James fired a ground missile from outside the penalty area in the 65th minute, and Miller shone in deporting it to a corner kick.

From that corner, Coulibaly rose to a header cross, which was easily grabbed by the Leeds goalkeeper.

Leeds scored the third goal in the 69th minute, after James sent a cross from the left side, Rodrigo tried to shoot it, but he made a mistake to pave the way for Harrison, who was free of censorship, to hit the net easily.

Chelsea’s suffering increased in the 85th minute, after the referee issued the second yellow card in the face of Coulibaly, after he obstructed Gilhardt, to end the meeting with Leeds winning by three goals.