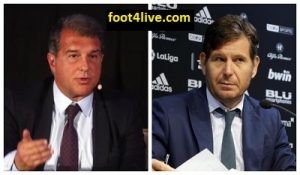 legal crimes: Barcelona club management is trying to find a solution to solve the legal crimes discovered in the contracts of some players.

The former president of Barcelona, ​​Josep Maria Bartomeu, did it a week before he submitted his resignation from the presidency of the Catalan club, according to the Spanish news agency learned from sources within the club.

According to the previous council, the contract renewals for this quartet in terms of salaries must be provided between 16 and 18 million euros.

However, the Catalan club considers those figures “too exorbitant and out of the market”, which the quartet obtained to extend the contract, and represent an additional fee on the salaries of the club’s coffers of 311 million euros.

The current administration, led by Juan Laporta, aims not to activate these contracts, and for the players to accept the conditions prior to the renewal process, as according to the legal department, it sees these contractual violations as evidence of an administrative offense from the previous board of directors.

You may like to read: Real Madrid vs Frankfurt: Uefa Super Cup prediction, kick off time