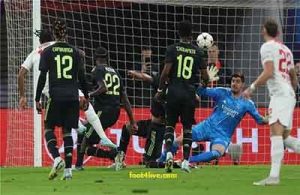 The German Leipzig defeated Real Madrid 3-2 today, Tuesday, in the fifth round of the European Champions League, group stage, to inflict the royal with the first defeat this season in various competitions.

Leipzig’s goals were scored by Jusko Gvaridol, Christopher Nkunko, and Timo Werner in the minutes (13, 18, 81), while Real Madrid’s Vinicius Junior scored in the 44th minute, and Rodrygo scored a penalty kick in the 90+4 minute.

With this defeat, Real Madrid’s balance froze at 10 points at the top of Group F, while Leipzig raised its score to 9 points in second place.

The match started with pressure from the guests, as Real Madrid midfielder Chuamini hit a ball that passed over Leipzig’s goal in the 4th minute.

From the first attack of the hosts, the Croatian Josko Gvaredol scored the first goal in the 13th minute. From a corner kick, Andre Silva crossed into the area, who hit a ball that was saved by Real Madrid goalkeeper Thibaut Courtois, to bounce in front of Gvarridol, who put him in the Spanish net.

Leipzig’s Nkunku missed the opportunity to score the second goal in the 16th minute, receiving a ball and taking advantage of Thibaut Courtois’ progress and dodging him outside the penalty area, and hit a ball that hit the outside net.

Leipzig player Haidara hit a curved ball on the edge of the penalty area, which was saved by Real Madrid goalkeeper Thibaut Courtois, and turned it into the corner in the 17th minute.

Christopher Nkunku added the second goal for Leipzig in the 18th minute, from a ball that hit the Real Madrid defense and arrived in front of him in the penalty area, and he hit directly a ball that hit the horizontal bar before hitting goalkeeper Thibaut Courtois.

Real Madrid striker Vinicius Junior received a pass deep in the penalty area, and hit a powerful ball that passed over Leipzig’s goal in the 25th minute.

Rodrigo Joyce went on the left side into the Leipzig penalty area, and hit a powerful shot, but goalkeeper Janis Blasevich saved it brilliantly in the 35th minute.

Leipzig goalkeeper Blasevich continued his brilliance by blocking another shot from Real Madrid’s Vinicius Junior in the 37th minute.

Vinicius Junior reduced the score for Meringue, in the 44th minute, as he received a cross from the right side through Marco Asensio and shot a header down the left of goalkeeper Blasevich.

With the start of the second half, Christopher Nkunku almost added the third goal in the 50th minute, but the match referee indicated that he was in an offside state.

Timo Werner missed the opportunity to score the third goal for Leipzig in the 71st minute, as he went off and hit a creeping ground ball that passed next to the right post.

Marco Asensio crossed into the penalty area towards Vinicius Junior, who hit the left post in the 78th minute.

Leipzig striker Timo Werner added the third goal in the 81st minute, receiving a cross from his colleague Simacan and hitting the ball past Courtois.

Real Madrid striker Rodrygo tried to reduce the difference with the royal’s second goal, and he went and shot a ball inside the area, which goalkeeper Blasevich saved in the 91st minute.

The referee awarded a penalty kick for Real Madrid in the 93rd minute, after Leipzig’s Christopher Nkunku tackled Rodrygo inside the area, and the Brazilian went to implement it and scored it successfully to the right of goalkeeper Blasevich, to add the second goal for Meringue.