Lewandowski last words to his team-mates 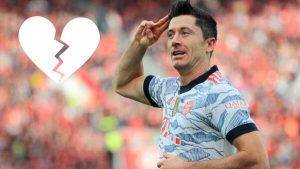 Lewandowski last words to his team-mates:

During his final days at Bayern Munich, Robert Lewandowski said a heartfelt goodbye to the club.

It finally came down to a verbal agreement with Barcelona.

Bayern had for weeks, said the striker was staying despite his desire to leave.

I wanted to thank my teammates, staff, Bayern management, and everyone who has supported me and helped Bayern win trophies.

In 2020, he lifted the Champions League after winning the Bundesliga eight times with Bayern.

Having twice been named FIFA Best Player, he leaves Bayern as one of their greatest ever players.

It was my honor to be able to spend eight wonderful years with this club and its fans.

I am proud of what we achieved together, but I would like to express a special thank you to the Bayern fans since you make Bayern the special club it is.

After a €45 million fee has been agreed on, the 33-year-old could sign a four-year contract with the Catalans on Sunday.

Sadio Mane, from Liverpool, appears to be Bayern’s replacement.

The German champions hope to spread the goal-scoring load more evenly instead of relying on one player to score 40 goals per season.

You may read also: Bayern welcomes Lewandowski for preseason