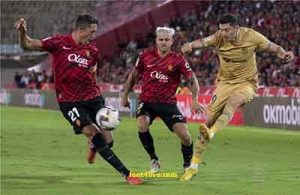 Barcelona won a valuable victory 1-0 against Real Mallorca this evening, Saturday, in La Liga, seventh round, at the latter’s stadium, “Iberostar”.

Lewandowski scored the only goal for Barcelona in the 20th minute.

With this victory, Barcelona raised its score to 19 points at the top of the La Liga standings temporarily, while Real Mallorca’s balance froze at 8 points in tenth place.

The first threat in the match from the hosts, as Ruiz hit a powerful ball on the edge of the area that hit Frank Casey, the Barca player, in the 5th minute.

Lewandowski scored the goal for Barcelona in the 20th minute, as he received a pass from Ansu Fati and proceeded with individual skill and evaded the defenses of Real Mallorca, and hit the ball far to the left of the goalkeeper, who failed to address it.

Several altercations erupted between the players of both teams, and the referee of the match issued yellow cards to Christensen, Pique, Costa, and Frank Casey.

The first half ended with Barcelona leading 1-0.

At the beginning of the second half, Real Mallorca’s Morroki headed a header that passed over Ter Stegen’s goal in the 50th minute.

Barcelona midfielder Frank Casey tried to shoot a powerful ball from outside the area that passed away from Mallorca’s goal in the 61st minute.

Real Mallorca’s Ruiz hit a ball from inside the area, which was blocked by Barcelona goalkeeper Ter Stegen, and turned it into the corner in the 63rd minute.

The second half did not witness dangerous attempts by Barcelona to threaten Real Mallorca’s goal, while the most dangerous opportunity for the owners of the land came in the 89th minute from Lee Kang, who hit a ball inside the area that passed next to the right post of Ter Stegen’s goal.

The Blaugrana secured the three points to continue its winning streak domestically and chased Real Madrid at the top.