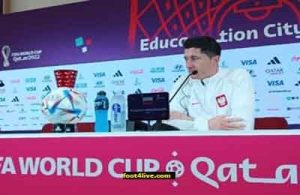 Robert Lewandowski, the star of the Polish national team, expressed his happiness at scoring his first ever World Cup goal, during the match against Saudi Arabia (2-0), in the second round of the World Cup group stage (Qatar 2022).

Lewandowski said, in a statement after the match: “Since I entered the field and during the national anthem, I felt that today is my day.”

He added, “I always struggled to score a goal in the World Cup, and today the dream came true, and I hope to score more.”

And he added, “When you play on behalf of the national team, you have to focus on results, but part of my identity also pushes me to achieve good statistics.”

He continued, “The match was great, and we fought for the victory, and made a great effort, to achieve a well-deserved victory, and we are proud of that.”

He explained that he replaced the shoe he wore against Mexico, because he was not feeling comfortable in the first match, due to the shoe sticking more to the ground.

And he continued, “This could be my last World Cup, so I try to do everything I have, and I have always wanted to score in the World Cup, and this dream has come true.”