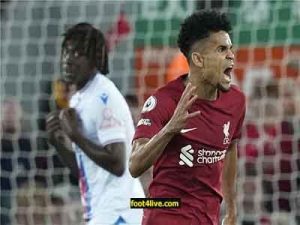 Luis Diaz’s wonder goal earned a point for Liverpool in a 1-1 draw against Crystal Palace as Darwin Nunez was sent off on his home debut.

As Wilfried Zaha opened the scoring in the first half and Nunez was dismissed just before the hour, Jurgen Klopp’s team appeared to be heading for defeat.
Although Diaz’s superb individual effort leveled the game, last season’s Premier League runners-up failed to find a winner.

With Manchester City already four points clear of Liverpool in the title race, this is another early season blow for Liverpool. However, as with their opening draw against Fulham, Klopp may see it as a point gained.

Mohamed Salah also came close to scoring from Trent Alexander-Arnold’s pullback, but his right-footed effort flew just wide of the near post. Liverpool began brightly as they sought to find an early opener, but Nunez mishit a volley at the far post.

Having absorbed a lot at the other end, it was Palace who took the lead in the 33rd minute when Eberechi Eze sped past Fabinho before playing in Zaha, who hit the bottom-right corner after beating Alisson.

Harvey Elliott’s chip to Nunez just before the break had Liverpool thinking they were level, but the deflected shot came back off the post.

In response to being shoved by Joachim Andersen, Nunez pushed his head into the Dane, and referee Paul Tierney immediately showed Nunez a red card.

After Diaz dribbled past several Palace defenders and unleashed a rocket-like effort past Vicente Guaita, the Anfield atmosphere soon improved.

Although Palace had a great chance at the far post when Zaha missed it, the hosts tried to find a winner despite having fewer players, but both sides settled for a point.