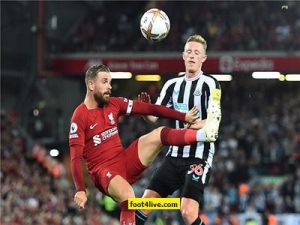 Liverpool achieved a dramatic victory at the expense of its guest Newcastle (2-1), on Wednesday evening, in the match that was held at Anfield, as part of the fifth round of the English Premier League.

Newcastle opened the scoring through Alexander Isaacs in the 38th minute, and Roberto Firmino equalized the score for Liverpool (61), before Fabio Carvalho snatched the victory with a deadly victory (90).

The first attempt in the match in favor of Liverpool came in the third minute, after Diaz sent a cross from the left side, followed by Salah with a shot on the bird that went away from the goal.

The response came from Newcastle in the 11th minute, with a shot from Isak from the edge of the penalty area, which went over the crossbar.

Newcastle almost opened the scoring in the 17th minute, after Fraser, free of censorship, received a ball on the borders of the area, to hit a powerful ball that just crossed the crossbar.

And Newcastle got a violation on the borders of the area in the 28th minute, which Trippier shot a direct ball that Alisson caught.

Liverpool missed a real chance to score in the 34th minute, after Firmino passed a magic ball to Diaz inside the penalty area, to evade goalkeeper Bob before striking strangely over the crossbar.

The goal of the guests

Newcastle opened the scoring in the 38th minute, after Isaac received a magical intersection inside the area, to be unique to Alisson and easily scored in the net, ending the first half with the lead of Newcastle with a goal without reply.

Newcastle started the second half strongly, after Isaac received a distinctive intersection, to manipulate Robertson inside the area and then hit the net, before the referee canceled the goal for offside in the 54th minute.

Liverpool searched for the equalizer in the 60th minute, with a powerful shot from Elliott from inside the area, which Bob starred in.

The Reds are back

Liverpool adjusted the result immediately afterwards in the 61st minute, after Salah passed a ball to Firmino inside the area, to hit the Brazilian directly into the net.

Liverpool tried to kidnap the victory goal, with a powerful shot from Diaz in the 79th minute from outside the penalty area, Bob starred in removing it to a corner kick.

In the 81st minute, Salah sent Diaz’s cross into the area, and the latter hit a direct ball that Bob grabbed.

Fabinho followed a ball away from the Newcastle defense inside the penalty area in the 83rd minute, hitting a powerful ball that went wide of the goal.

Fabinho tried again in the 86th minute, with a powerful shot from outside the penalty area, which went over the crossbar.

Liverpool scored the deadly winning goal in the eighth minute of stoppage time, after Carvalho followed a ball away from the Newcastle defense, within the 6-yard area, to hit a powerful ball into the net, ending the meeting with Liverpool winning (2-1).