Liverpool and Everton settle for a point in an exciting summit 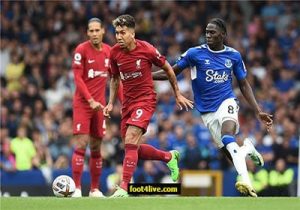 Everton and its guest Liverpool missed a large series of chances, to draw 0-0 on Saturday evening, in the opening of the sixth round of the English Premier League.

Liverpool ranked fifth temporarily, after collecting its ninth point, while Everton raised its score to 4 points in 14th place.

Liverpool coach Jurgen Klopp relied on the usual 4-3-3 game, as Joe Gomez stood alongside Virgil van Dijk deep in the back line, with the support of full-backs Trent Alexander-Arnold and Costas Tsimikas, and Fabinho played the role of the center player, and the young duo Harvey moved in front of him Elliott and Fabio Carvalho, behind the attacking trio, Mohamed Salah, Luis Diaz and Darwin Nunez.

On the other hand, Everton coach Frank Lampard resorted to the 4-3-3 method as well, where the back line of Nathan Patterson, Conor Cody, James Tarkowski and Vitaly Mikolenko, Tom Davies and Amadou Onana cooperated with each other in the middle of the field, and Alex Iwobi was embarrassed, behind three The attack consists of Demarai Gray, Anthony Gordon, and Neil Maupai.

Everton surprised their guest with a counter-attack in the sixth minute, when Mobay passed the ball to Onana, who hit a weak ball that was easily saved by goalkeeper Alison Becker.

Two minutes later, Liverpool lost the ball in their court, to pass Gray to Mobay, who directed the ball in front of the goal, Gordon tried to reach it to no avail.

The game calmed down a little, before Arnold crossed from the right, which was met by the giant Nunez with his head over the goal in the 18th minute.

The ball reached Gordon on the edge of the Liverpool penalty area, to hit it accurately, but Alisson was in the right place to control it in the 23rd minute.

Everton came close to opening the scoring in the 32nd minute, when Gordon advanced the ball, before the ball reached Mobay inside the penalty area, and Van Dyck cut the ball in front of the French striker, to reach Davis, who hit it with the outside foot, to bounce off the post.

Liverpool responded in the 40th minute, when Salah sent a cross from the right side to which Nunez rose with his head to hit it over the goal.

In the 43rd minute, Liverpool almost scored the goal, when Nunez controlled the ball on the right side, before he shot it to be blocked by goalkeeper Jordan Pickford before it bounced off the crossbar, but the Everton defenders failed to clear the ball, to reach Diaz, who dribbled before hitting the post. .

Roberto Firmino entered the Liverpool squad at half-time instead of Carvalho, and Diaz went from the left side, and passed to Nunez, who did not manage the ball well to hit the ball away from the goal in the 47th minute.

Elliott directed a low ball that Firmino could not reach, to settle at Tsimikas, who shot from a narrow angle away in the 49th minute.

An acrobatic back shot from Mobay passed over the Liverpool goal in the 50th minute, and Pickford controlled Nunez’s shot in the 54th minute.

Andy Robertson and James Milner participated in the place of Robertson and Arnold in the Liverpool squad, and Gordon made a dangerous start from the left flank, before passing Patterson’s side, who fired a shot that stood in front of defender Gomez in the 63rd minute.

A minute later, Pickford starred in stopping two shots from Firmino, before he pushed Fabinho’s shot away to a corner that did not pay off.

And goalkeeper Alison prevented Mobay from scoring the opening goal in the 65th minute, before the home owners scored a goal through Cody, which was later canceled by video technology due to the presence of infiltration.

Klopp put Diogo Jota’s card in place of Nunez in the 80th minute, and Everton’s substitute Dwight McNeil almost put his team ahead in the 84th minute, but his rebound shot from the defense was pushed out by Alisson with his fingertips above the goal.

Liverpool almost scored the winning goal in the 87th minute, when Salah passed the ball on the outside of the foot to Firmino, who followed it with one elegant touch, before Pickford removed it.

In added time, Salah hit the near post, without wishing Jota to follow the ball in front of goal.