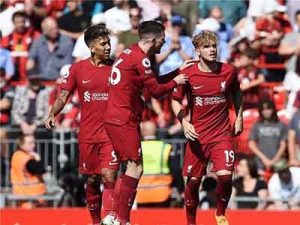 Liverpool swept its guest Bournemouth with a heavy score (9-0), today, Saturday, at Anfield, in the fourth round of the English Premier League.

Liverpool raised its score to 5 points to rise to eighth place, and Bournemouth’s balance froze at 3 points in 17th place.

Liverpool opened the scoring early in the third minute, after Firmino sent a cross from the right side, Diaz rose to her header into the net.

And soon, Liverpool added the second goal in the sixth minute, with a powerful arc shot from Elliott, who fired from the edge of the penalty area.

Salah missed a real chance to add the third in the 16th minute, after Elliott sent a cross to the Egyptian star in front of the empty net in the 6-yard area, but he shot strangely next to the post.

Salah returned to form the danger again in the 19th minute, with a powerful shot from inside the 6-yard area, so the Bournemouth goalkeeper shone in deporting it to a corner kick.

Arnold scored the third goal for Liverpool in the 28th minute, with a missile shot from outside the penalty area, which goalkeeper Travers failed to address.

The Liverpool Goals Festival continued by adding the fourth in the 31st minute, after Salah tried to pass a ball inside the area, which collided with the Bournemouth defense and paved the way for the uncensored Firmino, so the Brazilian scored easily.

Bournemouth almost reduced the difference in the 38th minute, after Christie received a chest ball inside the area, but he shot hard next to the post.

Firmino hit a ball from outside the area in the 45th minute, and the Bournemouth goalkeeper kept it at a corner.

Liverpool added the fifth goal from that corner, with a strong header from Van Dyck after a cross from Robertson, to end the first half with a clean five for the Reds.

Liverpool started the second half strongly, adding the sixth goal in the 47th minute, after Arnold sent a cross from the right side, Mepham tried to keep it away, but he accidentally put the ball into his own net.

The Liverpool train did not stop seeking, after Firmino received a ball from Diaz inside the 6-yard area in the 51st minute, and the Brazilian hit a ground ball that passed along the post.

Liverpool scored the seventh goal in the 62nd minute, after the Bournemouth goalkeeper missed Robertson’s cross, to pave the way for Firmino, who scored easily.

And the ball continued its stubbornness to Salah, as the Egyptian received a distinctive interface from Fabinho in the 75th minute, and although he was alone with goalkeeper Travers, he shot strangely over the crossbar.

Bournemouth’s collapse continued, and it received the eighth in the 80th minute, after Tsimikas paved the ball for Carvalho inside the area, and the latter hit a powerful ball on the bird in the net.

Liverpool’s appetite did not stop, and he scored the ninth goal in the 85th minute, after a corner kick by Tsimikas, and Diaz headed into the net, ending the meeting with a broad victory for coach Jurgen Klopp’s battalion.