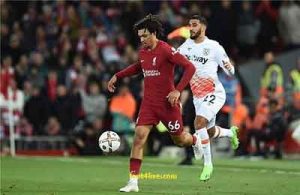 Liverpool continued to wake up, and beat its guest West Ham United (1-0), on Wednesday evening, in the 12th round of the English Premier League.
Reds striker Darwin Nunez scored the game’s only goal in the 22nd minute, with a header he shot into the goal, bringing Liverpool’s balance with this win to 16 points in 7th place, while West Ham’s balance settled at 11 points in 13th place.

usual method
Liverpool coach Jurgen Klopp resorted to the 4-4-2 method, as the partnership of Joe Gomez and Virgil van Dijk continued in the defensive depth, with the support of full-backs Trent Alexander-Arnold and Costas Tsimikas, and Thiago Alcantara and Jordan Henderson stood in the midfield, and the presence of Mohamed Salah and Fabio Carvalho On the flanks, Roberto Firmino swapped roles with Nunez in the front line.

On the other hand, West Ham coach David Moyes used the 4-3-3 method, with the back line of Ben Johnson, Thilo Kehrer, Kurt Zouma and Aaron Cresswell, and Decla Rice played the role of the center player, and in front of him were Flynn Downs and Thomas Suchek, behind the attacking trio. Created by Jarrod Bowen, Gianluca Scamaca and Pablo Fornals.

After a period of feeling the pulse between the two teams that did not witness serious attacks on the two teams’ goals, Nunez opened the series of opportunities in the 14th minute, when he met a long high ball, with a shot “on the fly”, which was saved by goalkeeper Lukas Fabiansky.

And Nunez was compensated in the 22nd minute, when he met with his head a distinctive cross from the left back Tsimikas, to the left of the goalkeeper, and one minute after the goal, Fabiansky denied the Uruguayan striker a goal, when he blocked the ball with his fist.

Liverpool came close to consolidating their lead in the 35th minute, when Arnold passed the ball to Salah, who fired an ambitious shot, which passed next to the far post.

Salah returned to try to score in the 38th minute, when he received a distinctive pass from Firmino, but the Polish goalkeeper Fabianski, had his attempt on the lookout, and after only one minute, a new attempt from Nunez shook the West Ham goalpost.

The referee awarded a penalty kick to the visiting team after using video technology, after a joint game between Gomez and Bowen, and the latter took the kick, but Brazilian goalkeeper Alison Becker saved it brilliantly in the 43rd minute.

Liverpool started the second half, attacking, with the aim of consolidating their lead, which was almost achieved in the 48th minute, when Salah exchanged the ball with Henderson, before firing over the goal.

Klopp directed Nunez, Carvalho and Thiago, and included Harvey Elliott, Curtis Jones and Fabinho in their place, to which Moyes responded by placing Said Ben Rahma in the place of Fornals.

Left back Cresswell stood in front of Firmino’s attempt after a corner kick by Henderson in the 63rd minute, and Benrahma followed from the first touch a long cross, but Alisson controlled it quite easily in the 70th minute.

A darbka cross ball in the West Ham penalty area, before it reached Jones, who shot from the middle of the area, a powerful ball that bounced from the defense and crossed the goal in the 75th minute.

West Ham defender Zuma almost accidentally scored his team’s goal when he tried to clear Henderson’s cross, but the ball hit the crossbar of his team’s goal in the 78th minute.

Fabiansky went out of his net to deprive Salah of a single through ball in the 84th minute, and two minutes later, a pass from Bowen reached Socic inside the Liverpool penalty area, but the substitute James Milner denied him the Czech international from paying.