Liverpool continues its revival with three goals against Southampton 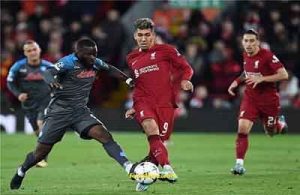 Liverpool won a valuable victory against Southampton, 3-1, on Saturday evening, at “Anfield”, in the English Premier League, 16th round .

Liverpool’s goals scored by Roberto Firmino in the sixth minute and Darwin Nunez “two goals” (21 and 42), while Southampton’s only goal was scored by Che Adams (9).

With that result, Liverpool raised its score to 22 points, to rise to sixth place, while Southampton’s balance froze at 12 points in 19th place.

Liverpool opened the scoring in the sixth minute, after Firmino rose to a cross from a free kick by Robertson, heading a header into the net.

And Southampton managed to adjust the result quickly in the ninth minute, after Prause sent a cross from a foul, through which Adams took advantage of the wrong exit from Alisson, to hit a header easily that went into the net.

Liverpool missed a real chance to score the second goal in the 16th minute, after Nunez sent a cross from the left side, towards Salah, who is free of censorship inside the area, so that Al-Masry fired a direct ball, the brilliance of Bazono in addressing it.

Liverpool managed to add the second goal in the 21st minute, after Elliott sent a distinctive intersection to Nunez, who is free of censorship, inside the area, to hit a direct ball on the bird that lived in the net.

Liverpool almost added the third goal in the 30th minute, after Salah passed a ball to Nunez inside the area, who, in turn, passed a wonderful ball with the heel to Firmino next to him, for the latter to hit a direct ball that Pazono brilliance in addressing.

Salah tried to write his name in the list of scorers in the 32nd minute, after receiving a pass from Robertson inside the area, to hit a weak ball that hit the Southampton defense and went easy in the hands of Pazono.

Nunez added his second and third goal for Liverpool in the 42nd minute, after he followed a cross from Robertson, shooting a direct ball into the net, to end the first half with a 3-1 lead for Liverpool.

Liverpool started the second half strongly, with Firmino ascending to a cross from a corner kick taken by Robertson, hitting a strong header slightly over the crossbar.

Salah followed Arnold’s cross in the 55th minute, shooting a header that went over the crossbar.

Southampton looked to reduce the difference in the 62nd minute, with Al Youssi alone against Alisson, shooting the Brazilian goalkeeper’s brilliance in stopping it.

Liverpool’s defensive slackening continued after the 63rd minute, after Iduzzi received a magical pass inside the area to single out Alisson, firing the Brazilian goalkeeper’s brilliance again in stopping it.

Liverpool returned to form the danger in the 72nd minute, with Van Dyck rising to a cross from Robertson, shooting a header that just passed next to the post.

Alisson continued his brilliance in the 77th minute, by blocking a strong header from Adams, and Fabinho then rose to a cross from a corner kick in the 82nd minute, shooting a header that went wide of the goal.

Van Dijk almost added the fourth goal in the 88th minute, by ascending a cross from a corner kick, shooting a header that passed just next to the post, to end the meeting with a victory for Liverpool (3-1).