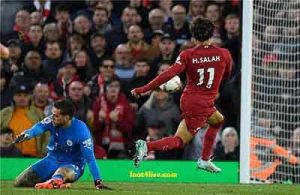 Liverpool inflicted the first defeat on defending champion Manchester City this season, by defeating them with a clean goal on Sunday evening, in the top of the English Premier League, eleventh round .

Mohamed Salah scored the only goal of the match in the 76th minute, to give Liverpool a kiss of life, who raised his score to 13 in eighth place, while Man City’s tally remained 23 points, 4 points ahead of leaders Arsenal.

The first quarter of an hour of the match, did not witness opportunities from both sides, with Liverpool trying to prevent Manchester City from imposing its control, through pressure, which caused some confusion for the visiting team’s defenders.

The first chance of the meeting came in the 15th minute, when City striker Erling Haaland’s shot rebounded from the defense, reaching the ball to Phil Foden, whose attempt went to the same fate, so that his German colleague Ilkay Gundogan picked up the ball, and fired a shot that was saved by Liverpool goalkeeper Alison Becker.

Liverpool almost opened the scoring in the 21st minute, when Harvey Elliott sent a cross, which reached the unmarked Diogo Jota, whose weak attempt settled in the hands of goalkeeper Ederson.

Liverpool continued their pressure, as right-back James Milner sent a dangerous cross, which Ederson left, to wobble the ball in front of left-back Andy Robertson, who hit his left over the goal in the 24th minute.

Halland passed the ball to Foden, who could not create the space needed to shoot, to guide it to Bernardo Silva, who shot from the outskirts of the penalty area next to the goal in the 31st minute.

Manchester City defender Nathan Ake’s ball reached his teammate, Haaland, who fired a shot that was controlled by goalkeeper Alison in the 33rd minute, and two minutes later, a pass from Manchester City playmaker Kevin De Bruyne rebounded to Halland, whose header topped the goal.

And in the 40th minute, De Bruyne made a special effort on the right side, before he raised a cross, Haaland met it with a header in the arms of Allison.

Five minutes after the passage of the second half, Salah was alone in City’s goal after a pass from his colleague Roberto Firmino, but he chose to shoot instead of passing to his colleague Jota, to keep Ederson alone with his fingertips.

The referee, after using video technology, canceled a City goal scored by Foden in the 55th minute, because Halland had infringed in the goal-building shot.

A counter-attack confused the City defense, reaching the ball to Salah, who cleverly raised it on the head of Jota, who crossed the header of the crossbar despite standing in a comfortable place in the 56th minute.

In the 64th minute, goalkeeper Alison played a heroic role in banning a new attempt from Halland after a pass from Gundogan.

Salah created space for himself on the right wing, before hitting his left ball that passed near the far post in the 70th minute.

Liverpool finally managed to open the scoring in the 76th minute, when goalkeeper Alison sent a fast ball forward, which Salah controlled after getting rid of Cancelo’s control to be unique in the goal and put the ball into the net.

Liverpool almost added the second goal in the 77th minute, when substitute Darwin Nunez launched the ball, before he shot far from the goal.

Liverpool coach Jurgen Klopp received a red card, 5 minutes before the end, for his objection to not calculating a violation of Salah after a collision with Bernardo Silva.

Substitute Fabio Carvalho chose to advance with the ball and shoot instead of passing to Salah or Jota, to waste the opportunity to consolidate the lead over Liverpool in the 87th minute.

Nunez wasted alone in front of the City goal in added time, before time stopped after Jota fell injured, so that the rest of the minutes passed without danger.